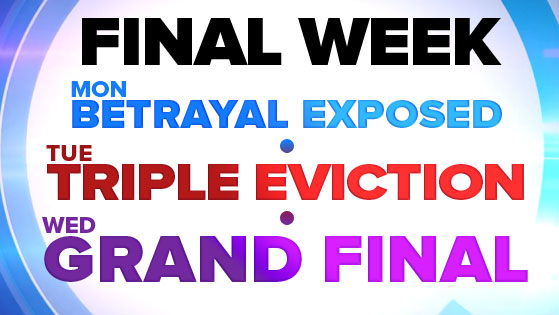 Big Brother 2014 will wrap up on Wednesday, November 26th from 8:30 pm as originally planned, but not before a secrets and betrayal special on Monday and a triple eviction on Tuesday.

Monday, November 24th: With only six contenders left in the house Big Brother reveals who has been hiding what. From nominations and betrayals to rewards and power plays.

Tuesday, November 25th: Eviction. Six housemates are trimmed down to a final three with the Grand Final only 24 hours away.

Preliminary television guides suggest the finale will air from 8:30 pm local time in each state. This will mean the winner announcement will be delayed by time zone differences everywhere – including BB’s home of Queensland – and live in New South Wales, Victoria and Tasmania. This is despite the 2013 Finale making television history of broadcasting live everywhere except Western Australia and the Northern Territory.

In an interview on Mike Goldman’s podcast, Alex Mavroidakis reveals the Finale will include the housemates watching the show along with Australia, including a look back at the news events that have been going on throughout the 80 day season. There will be “some form” of flashback of iconic moments that made Big Brother Australia over its 11 season history, and the winner’s announcement will occur while the final two are inside the house. Tickets to the Grand Final went on sale today.