Late Night Feast premiered on our screens last week – delivering a welcomed less sanitized insight into the housemates’ personalities and even a little bit of flesh (if you concentrate hard enough!) 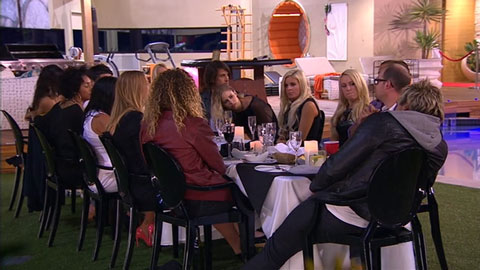 The title of the new late show led to much speculation on the content that may make it into the show – particularly when the initial classification was downgraded from MA15+ to M. Would the aired footage be restricted to a single night? One Behind Big Brother member was spot on with his prediction on the format:

the Theorist: “I’m not going to be surprised if the entire hour is centred around the party.”

The first dinner party, believed to have occurred on Friday night, started with housemates speaking about the topics they are passionate about around a buffet-style outdoor feast. As the night rolled on – and the alcohol kicked in – the housemates moved onto dancing and a game of truth or dare, using questions provided by Big Brother.

Here’s what some of our members had to say about the premiere episode of Late Night Feast which aired last Tuesday:

Brekkie: “Too much diary room and too staged, but good to have something back that isn’t family friendly – though natural conversations and events rather than events controlled by BB would be best. One advantage of it focusing on a set up event was it kind of felt like live streaming.”

chumly: “Way too contrived and focused on adolescent party games. I don’t think I’ll watch that again (who am I kidding, I probably will). It’s like there’s this total lack of confidence in the HMs’ capacity to provide entertainment with interesting conversation and character development. I was hoping it would just be a compilation of all the interesting convo’s the HMs had during the week that were too adult for 7pm. Disappointed!!!”

inumeenu: “While the whole party thing was very contrived, it did make for great television! Hopefully next week’s LNF isn’t as set up…”

BBfan-: “That was a great episode. I know BB basically staged it all but it was still way better than the daily shows. I feel like this is one of the only times we’ve been able to see the HMs real personalities.”

BB1: “It’s the most realistic thing and closest to a real social experiment that I’ve seen on BB in ages. I do hope there is more random scenes next week, but it was a great ep and it is what Big Brother is all about.”

The second weekly feast was Hawaiian-themed for the first time, but beneath the theme it is a buffet-style dinner all over again. In a repeat of last week, housemates answered questions about themselves around the outdoor dinner table. The questions asked this time consisted of “If you were single, who would you hook up with in the house?” or “As a kid, what did you want to be when you grew up?”

Once again, dancing followed the buffet dinner. A game of “hot seat” followed where housemates had to truthfully answer questions that were asked by their fellow housemates – think of it like truth or dare without the dare. Unlike in the first week, Big Brother did not provide any questions.  A spa session was next with a somewhat awkward moment between Ben and Drew. You want naked flesh you say? Well, Caleb and Ed’s butt crack did make it to air. And if you really concentrate, you may just see a reflection of Tully’s breasts – if only for a second or two. What do our members think of Late Night Feast after viewing the second show?

Someone: “I am quite disappointed that they appear to be throwing a party every week and basing the show around that. The show was good to watch, but it could be so much better.”

Shackles: “Surely they shouldn’t do a weekly ‘late night feast’ just for the sake of the adult show. I wouldn’t want to sit through it again, especially through those awkward truth or dares, seriously. And it will be a rehash anyway. I don’t want groundhog day.”

Poona: “Wait.. I certainly hope this isn’t how the show works regularly? They’re all around a table, just chatting, etc and its setup by Big Brother?”

rifles: “Um this is the exact conversation and scenarios like last week, but in different clothes.”

rachael92: “Surely they won’t throw them a massive party each week? Seriously, all I want is to hear them talk about more adult stuff!”

starry: “Something just set up is terrible, it’s like what CH5 did in Britain in recent years, things get staged too much and then it’s hardly like BB anymore.”

Generally speaking, the extra and less watered down insights into the house are an essential puzzle piece to the Big Brother franchise – but we feel Channel 9 are going about it in the wrong way. Whilst we applaud them for finally coming to their senses, what we really want to see are the natural events that occurred in the house from the whole week and not a show based around ‘manufactured drama’ one night of the week. The lack of Mike Goldman – or anyone for that matter – narrating the show does give off a psuedo-liveish feel, but there is also too much commentary from the housemates in the diary room. It seems Late Night Feast is going the way of Friday Night Live – a different theme each week to make the show feel fresh and new but really it is same old show format in different lipstick.

What is your verdict on the Late Night Feast show format? Comment via Facebook below or join in the discussions on the forums!

2 Replies to “Late Night Feast: good but not great”