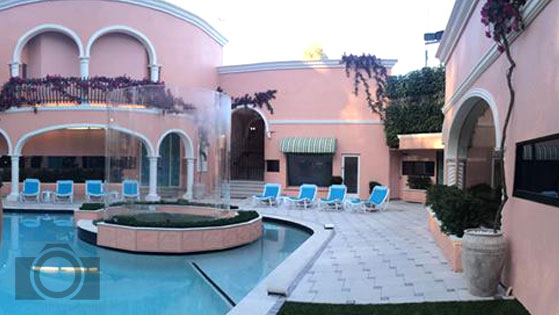 In the lead up to the 11th series of BIG BROTHER which launches tonight, photos of this year’s ‘old-school Miami with touch of Hollywood glamour’ themed house have popped up on numerous news websites near (News Corp) and far (Daily Mail.co.uk). Hidden amongst a large volume of duplicate photos are some decent glimpses into what the 2014 house will look like which you will see all in one place – Behind Big Brother.

Starting off with a 2013 vs 2014 comparison, the major changes are the extension of the shell roof structure and a raised section of roof to accomodate more inside space including an upstairs area. Outside, the basic arrangement of the yard hasn’t changed from last year – the pool, gym and laundry are in the same location. What has changed beyond theming is that the laundry is now enclosed.

The treehouse (8) is seen in previously published aerial pictures from the Daily Mail and also in the Big Brother promo featuring The Block judges touring the compound (adjacent below). A maximum of three housemates are permitted in the treehouse at a time, creating an opportunity for intimate conversation or a round of gossip.

The laundry (5) is in the same location as last year but has been enclosed, creating a laundromat feel and another space for housemates to congregate in small groups away from others – backstabber, anyone? Coin slots can be observed on each of the washing machines. Don’t mind the faces – they are rehearsal housemates! 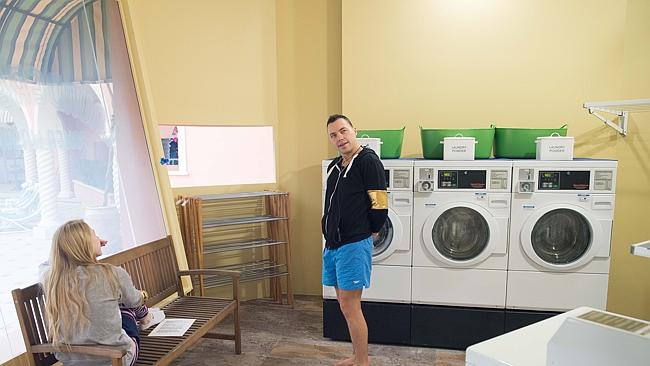 We’ve only seen the inside in short bursts – the most revealing being the test run with journalists, radio personalities and competition winners. The lounge room features a large (but by no means biggest in the southern-hemisphere) chandelier. The door separating inside from outside is again solid which blocks out any natural light from coming inside inside – this is not a good thing as night and day look the same. 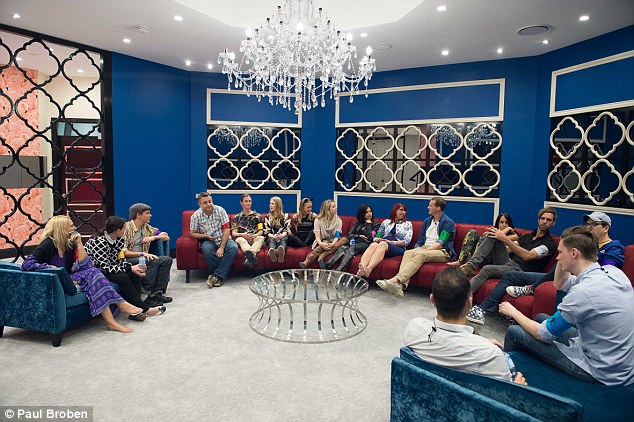 The Diary Room is reportedly upstairs for the first time in Australian Big Brother history, accessed via this inside carpeted staircase: 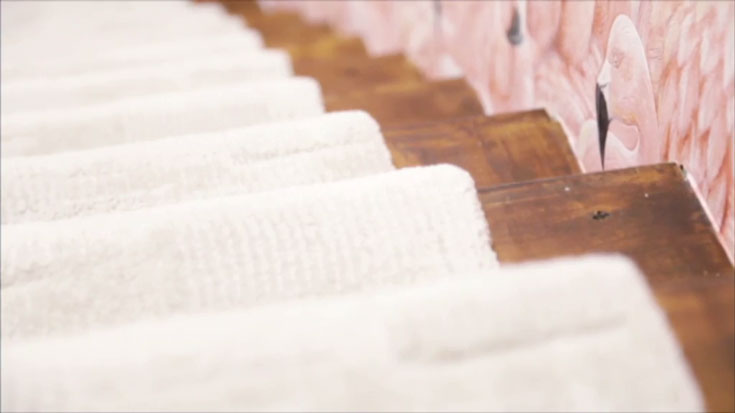 Elsewhere around inside, there are two bedrooms – one red and one blue (shown right), a central bathroom (adjacent lower left) and a dressing room. There is also a room set up as an art studio (adjacent lower right) – the question is, is it configured for a weekly task or something bigger?

Ex-Garden of Eden and Presential Suite rewards space areas have been combined into one rewards space known as The Sanctuary. The theming of this area is “Bali” and has been constructed in part by Michael and Carlene from The Block: Glasshouse – a cross-promotion, no doubt! Finished renovations of the area are still under wraps, but here’s a snapshot of it in the middle of construction:

Stay tuned to Behind Big Brother this evening as the 11th series of Big Brother kicks off at Dreamworld.