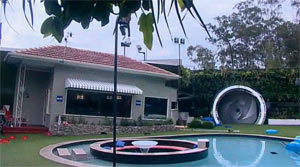 Will the dust now settled on this years’ big comeback and the waiting game for news on the future of the series, Ex Housemates are still fulfilling media commitments.

Now as we all well know many interesting things have come out of the housemates doing press interviews (Chambergate, ect. Ect.) But it’s Housemate Stacey’s recent interview with a Website that really captured my attention.In this interview she stated that every time she was called to the diary room she feared it was because the series had been axed due to her and her fellow housemates being “boring”. She also stated that many a time she thought the HM’s needed to be more entertaining for viewers. Boring is a word that has been used in many media articles in regard to the housemates this year, but hold on a second aren’t they all missing the point?

Although I am fully aware Big Brother is an entertainment show, first and foremost the franchise is about throwing a bunch of people into an environment and leaving them mostly to their own devices. So, really the show isn’t about the entertaining antics but the interaction between housemates and the housemates as people themselves, It’s about peeling back the layers and seeing the real person, warts and all. As long as the cast is interesting at personality level then it shouldn’t overly matter what they do.

But Stacey’s comments and media write-ups also raise another question in my mind, if the housemates were so “boring” why during the entire three month run during any given show were their 500,000+ people tuning in each night? Some nights that was even higher into the million viewers mark. So, obviously they weren’t that boring.

Personally, I think the Australian media may have forgotten the bones of the show in the four years it’s been away. It’s about the personalities, not the twists or flashy tasks or gimmicks. Sure, these help add to the show and make things more interesting for a viewer. But at the end of the day it is about the viewer forming a connection for the people onscreen and picking up and voting.

What do you guys think of the media’s treatment of the show this year? I’d be interested to hear your thoughts. I’ll be back on Friday for the last time this year with Part 2 of my Wrap-up, which will cover my thoughts on the twists, tasks and most importantly the housemates themselves.