Here are some anecdotal facts for you – how much did the average Big Brother viewer spend on voting this season? 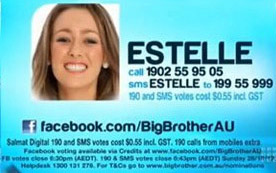 According to an anonymous poll on our discussion forums, the vast majority of fans did not spend any money. Out of those who did, it mostly fell between $10 and $30.

We also asked the question on twitter and received mixed answers:

@behindbb about $50, I would voted more if I had a job and no car or bf lol

Interestingly, a few viewers who did not spend any money would have happily parted with their cash if the season had been based on ‘vote to evict’ rather than vote to save:

@behindbb i didn’t vote at all because none of the HMs were likable enough to be worth it. However, vote to evict would have bankrupted me!

@behindbb I would’ve spent money if it was vote to evict not vote to save. Estelle would’ve been gone much earlier!

And finally, many viewers who purposely chose not to spend any money voting would have gladly paid for live internet streaming:

@behindbb Yes, easily. I felt this season we didn't get to see enough of what the housemates were really like. Streams bridge the gap.

@behindbb hell yes! I would have spent up to $70 for live steaming :)

How much did you spend on voting this year, and now that the show has finished – was it worth it? Tell us below or join us in our discussion forums.