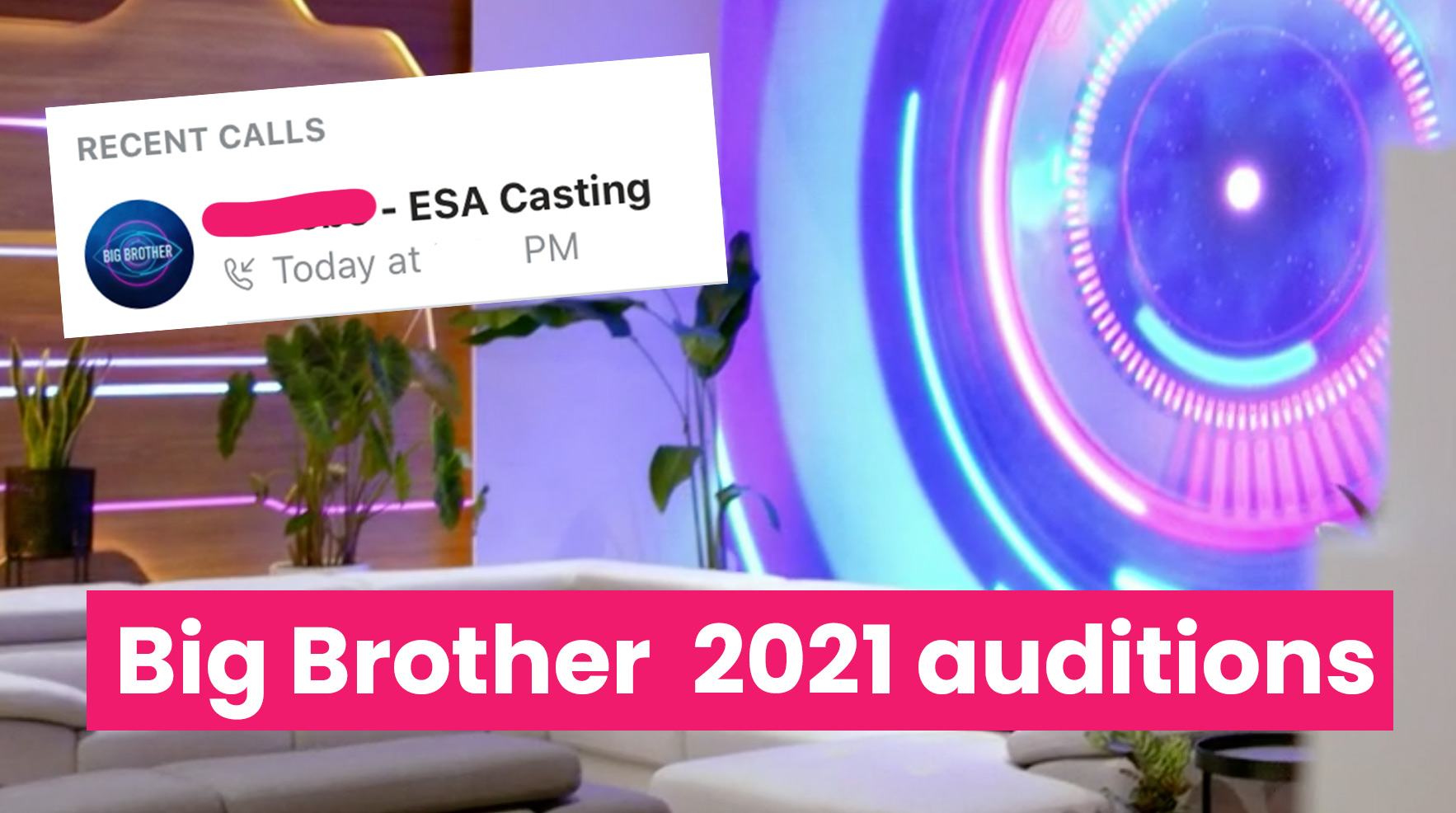 The phone interview is pre-screening before you’re invited to an in-person interview. We’ve heard from a handful of aspiring housemates who have so far received a call.

The call takes about 40 minutes. Producers will ask you to talk about what you wrote in your application, but there also seems to be a standard set of questions that may be asked:

In-person interviews start later in August and will run for about a month. In most cities, applicants will usually be invited to a hotel or conference centre to audition in groups.

For Victoria, the in-person auditions will be over Zoom due to COVID restrictions.

Big Brother 2021 will actually film between October and December of 2020. It will broadcast in the first few months of 2021.

We’re about halfway through the season and there’s a clear Big Brother Australia winner, according to most betting bookmakers.

Failed AFL player Daniel is picked to win the season, according to big agencies Sportsbet and Ladbrokes. His odds are $2.25.

TAB has a different view, with Kieran and Daniel neck-and-neck to win at $3.00. Both housemates are getting the most footage exposure in daily shows.

All betting agencies have the same housemates picked for second and third place: Chad and Sophie.

This does match up with early promo footage, where Channel Seven accidentally revealed the final housemates on the show.

Fan favourite Angela doesn’t stand a chance to get to the finale, she’s coming in seventh place with all betting agencies.

There is still room for the betting odds to shift substantially from unexpected evictions. At the start of the season Laura was tipped to get quite far in the show, only to be first evicted.

Daniel has stayed bookmaker favourite since the show launch. It would fit the pattern of Big Brother Australia finalists often being white, male and somewhat blokey.

Once housemates are evicted down to the final three, the Australian public will choose the final winner. Eagle eyed fans in our discussion forums have discovered an early promo video for the season accidentally reveals the final seven housemates.

The promo was released just before the show began airing. In a very short segment, seven housemates are shown competing in a challenge involving a large metal frame.

The housemates appear to be Casey, Mat, Daniel, Kieran, Chad, Sophie and Sarah. Both Sarah and Kieran fall off the frame.

Interestingly, the metal frame can hold eight housemates, but one spot is blocked off with a large board. Seven stools are pictured in the background for housemates to sit on.

A later clip holds clues to who the final four housemates are, although this one is harder to say for sure.

Four housemates are lying in a water chamber. It doesn’t look like the chamber has room for anyone else. It appears to hold Mat, Chad, Daniel and Sophie.

According to producers, housemates will continue to vote each other out until there are two or three remaining. The public will have the final vote on the winner. 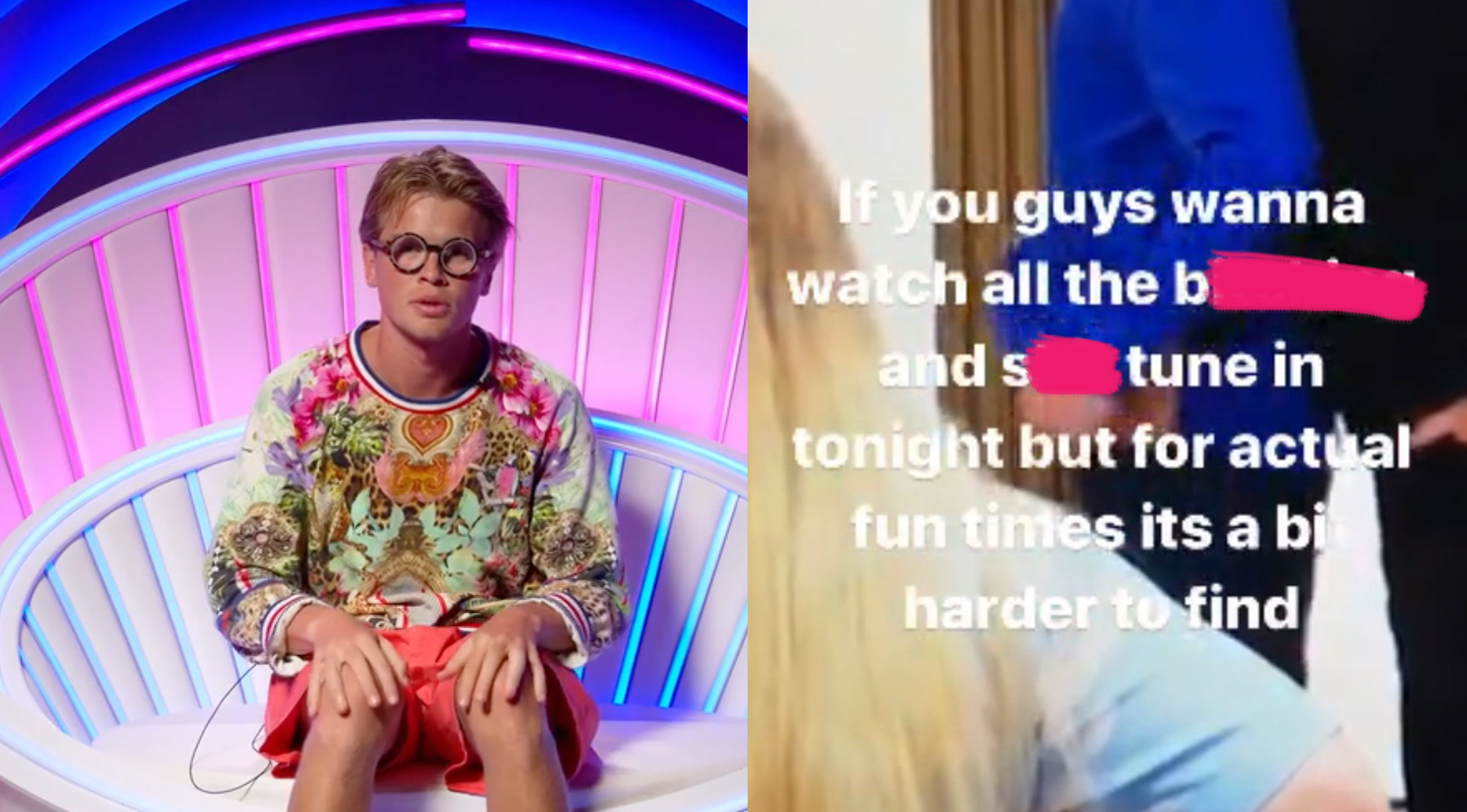 Xavier Molyneux has been posting jokey jabs on Instagram about what Big Brother producers choose to show, and how much air time he gets.

The housemate is gaining notoriety for barely appearing on the main BB episodes, and has even updated his Instagram profile description to confirm he is “yes…..’That Blonde Guy in the background'”

In a recent Instagram story, Xavier posted previously unseen footage of housemates completing a task, with the caption “If you guys wanna watch all the bitching and shit tune in tonight but for actual fun times its a bit harder to find”.

The footage shows the housemates joking together and having a good time, but it didn’t make the final cut for the Channel 7 show. It ended up as extra footage on Seven’s website.

It hints that the mood in the house was actually far friendlier than the show makes it appear.

As part of the ongoing jab, Xavier has been featuring his friends in Instagram stories, who claim they’re actually Xavier and thanking viewers for him “getting plenty of airtime tonight“.

Unlike other housemates, Xavier has not posted any official Big Brother promotional material outside of stories, and the account doesn’t appear to be controlled by Channel 7.

This is raising eyebrows as it appears Xavier may not be fully happy with his treatment on the show.

Various websites have also speculated Xavier was a secret actor, although this is up in the air. He starred in one locally produced movie, but this doesn’t necessarily mean he’s a professional actor.

Fellow housemate Shane is also in the spotlight for not getting much airtime on the show.

We’ve had three evictions, three people of colour were evicted and all four POC housemates have been nominated. Out of a house where 80% of housemates are white.

With those numbers you can’t deny that racial bias is playing out in the house, whether the housemates are conscious of their biases or not.

Twitter has naturally been divided on the “real” reasons Laura, Allan and Soobong were evicted in rapid succession. Allan, who is still under contract with the show, told Huffington Post it was just “coincidence and bad luck” that the first three evictees were people of colour.

Really though? What are the statistics of that happening in a house with so many white Australians?

Of the viewers who deny there is a racial bias problem, the most common excuse is that the evicted housemates “were a threat”.

Being such an incredible “physical threat” was the official reason Soobong was nominated by Sarah and Talia. The line was also frequently trotted out by housemate Daniel, who later campaigned heavily for Soobong’s eviction.

Sarah, Talia and Daniel all seemed to be oblivious to the fact there are at least three other equally buff white men in the house. And of the two physical challenges so far, both were won by women. Those more immediate threats didn’t seem to be front of mind.

No surprises that Daniel was strongly in favour of evicting all three housemates of colour.

The other frequent line is that the evicted housemates simply “didn’t fit in” or “didn’t put in the effort to get to know others”.

Laura has addressed this directly, telling Huffington Post that there were significant cultural differences, and when when she tried to talk about race, she was shut down by the white housemates.

The last remaining housemate of colour is Angela. But with 16 other white housemates, and the house biases demonstrated so far, it’s very unlikely she is a contender to win.

“Tradie slash model” Chad Hurst was introduced as one of the first housemates on tonight’s new version of Big Brother Australia.

While Chad was upfront about his modelling, he failed to mention some of that modelling included nude shots.

Channel 7 have said these photos are from a shoot in 2013 for BeautifulMag, however of all the photos we saw, they appeared to be from multiple photo shoots.