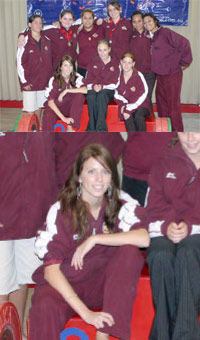 Another day another housemate secret is cracked.

Behind Big Brother user Sledge has found Angela Murray’s profile on the Queensland Weightlifting Association website where she is listed as being part of the ‘Cougars’ club.

The association’s June 2006 magazine includes a photo of Angie with the Under 16s weightlifting group alongside some info on her performance. The young Angie is sporting brown hair.

We don’t speak weightlifter so we don’t know what terms like “clean and jerk” actually mean, but here’s a snippet from the magazine anyway!

“Angela Murray in the 48kg category came out strong, powering her first snatch of 25kg. Her third attempt was an excellent fight to achieve 32kg. She made her first two clean and jerks look easy, but missed the clean on her third attempt and ended up with a 32kg snatch and a 40kg clean and jerk with a total of 72kg placing 2nd in both Under 16 and Under 18 in the 48kg division.”

One Reply to “Angie was a teen weightlifter”