Update: After we asked Big Brother Executive Producer Alex Mavroidakis over Twitter why the ‘cough’ footage had been taken down, the episode magically reappeared. He wouldn’t explain why it was taken down. 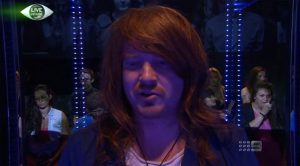 Original article: The issue of the ‘not entirely soundproof’ nominations chamber has become more suspicious after footage showing it’s not soundproof mysteriously disappeared from the official Big Brother website.

Last week’s nominations episode shows Zoe coughing loudly while Michael allocates nomination points and the sound of her muffled coughs can be clearly heard within the chamber.

That whole episode (Ep26) has now been completely removed from the Big Brother website after we reported on it. No other episodes from the past three weeks have been removed (scroll down to watch the missing episode on Youtube).

Recent evictees Ray and Sarah have already said the chamber leaks sound. Specifically, Sarah told one fan that you can hear ‘S’ words said by the person nominating.

This week producers went into damage control, playing extra loud ‘wave’ music into the nominations room and running a sound test with Layla, who initially did not know how to respond.

Besides the obvious point that if the chamber was 100% soundproof you wouldn’t need to play any wave noises, users on our forums were quick to point out that many housemates still showed reactions when their names were said inside the chamber.

Here’s the episode that producers don’t want you to see anymore. Fast forward to 25 minutes and 20 seconds to see the cough that has busted the soundproof myth.

One Reply to “Chambergate: BB hides footage showing booth is not soundproof”