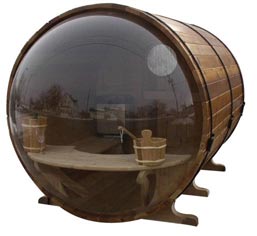 An Australian spa and sauna supplier have announced on their website that they will provide a unique barrel sauna and spa for this year’s Big Brother house. The supplier is notifying customers that all other orders have been pushed back to meet the needs of the show.

UPDATE: Within hours of posting this story Ukko Saunas have taken their Big Brother announcement off their website. We predict the show producers are freaking out again.

The barrel sauna – which is custom made in Canada – comes in three different models, two of which have transparent panels built-in: perfect for Big Brother’s cameras. The model most likely selected by the builders would be the ScenicView, which has a bubble wall built in to the side.

All spas from the manufacturer are below-ground, providing the optimal viewing angles for the cameras.

For this year’s house, both the barrel sauna and spa will be housed in the Rewards Room. It’s not yet known how housemates will win access to the room as Friday Night Live has been canned.

This isn’t the first time a Big Brother house has included a sauna – in 2005 and 2006 saunas were attached to the bathroom for all housemates to use. Unsurprisingly, some of Big Brother Uncut’s best footage was centred around housemates use of those facilities.

Thanks to Daltrim on our forums.

3 Replies to “House spa and sauna”