Did you attend the Big Brother housemate hunt and get rejected for no apparent reason? You’re not alone – reports from those who attended tell of a strange selection process favoured towards the overtly extroverted.

Typically auditionees are rounded up in groups of twelve and then asked to participate in ‘fun’ games (such as constructing a sailing ship) for around fifteen minutes. Each potential housemate is then asked some ‘opinionated questions’ which are usually centred around political knowledge.

After these questions almost all contestants are eliminated – usually one to three people out of each group of twelve make it through to the next round.

Behind Big Brother user ~Robbie~ tells us “most of us in my group were genuine ‘normal’ people, but the three out of twelve in my group who moved forward would have been the ‘fame whore’ type.

One woman who got through looked stunning, like a pro model, one of the dudes that made it, I was told he was putting on some sob story because a guy who went to the the same school as him was in our group and he was pissed when he heard the guy going on with the sob story… then next minute he got through [too]. 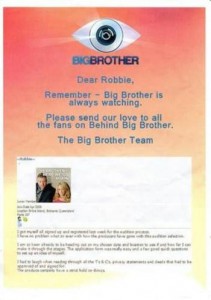 And the creepiest part of the audition process? The Big Brother production crew have been monitoring potential housemates via their email addresses and social media profiles. After being rejected from auditions, ~Robbie~ was “officially recognised by the Big Brother staff as a member/fan from THIS site, just as I was about to leave, they asked for my name again and then handed me a sheet of paper that said…

Dear Robbie, Remember – Big Brother is always watching.
Please send our love to all the fans on Behind Big Brother. The Big Brother Team.

Attached to the sheet of paper was a screen capture of a post ~Robbie~ had made on the Behind Big Brother forums several months ago discussing his registration for the housemate hunt. ~Robbie~ predicts a BB recruiter recognised his name, email address and location posted to the forums and handed him the sheet of paper because of his online activity.

It seems the Big Brother production crew have been researching potential housemates from the very beginning via their Facebook profiles and online activity. Didn’t make it through to the next round of auditions? Don’t feel too bad – they probably decided it from your Facebook profile long ago.