the Theorist said:
Where are they from? They’re LQ so I’m presuming a feed or ad somewhere online. Screener?

I’m only curious because it’s hilarious how much has got out this year.
Click to expand...

Ben and Rob said they have already seen tonight's episode on their show last night so looks like 7 sends out screeners to the media.

sav0001 said:
Ben and Rob said they have already seen tonight's episode on their show last night so looks like 7 sends out screeners to the media.
Click to expand...

You big tease you!

Meglos said:
They've been in spoiler tags, you don't have to read them.

Usually I wouldn't, but this season has been such a self-sabotaged mess that the efforts you have to go to NOT be spoiled by the incompetence of the network itself is not worth the effort.
Click to expand...

You know it's bad when the spoiler was already spoiled!

On a popular poll on Facebook fan group, it asks who you want to win. Sophie/ Dan / Mat / Chad

BB Daze said:
On a popular poll on Facebook fan group, it asks who you want to win. Sophie/ Dan / Mat / Chad

Yeah I just can't see any way that Dan wins. His haters outnumber his fans. Just out of curiosity, what page is this?

BB Daze said:
On a popular poll on Facebook fan group, it asks who you want to win. Sophie/ Dan / Mat / Chad

If chad or Sophie win it will be not only the end of big brother but the end of humanity as we know it.

sav0001 said:
Just out of curiosity, what page is this?
Click to expand...

buck07 said:
Looks like tonight is when Sophie gets in trouble for scrawling on the walls in the white room. A precursor to her writing out lines on a chalk-board ?
SOMETIME LATER: 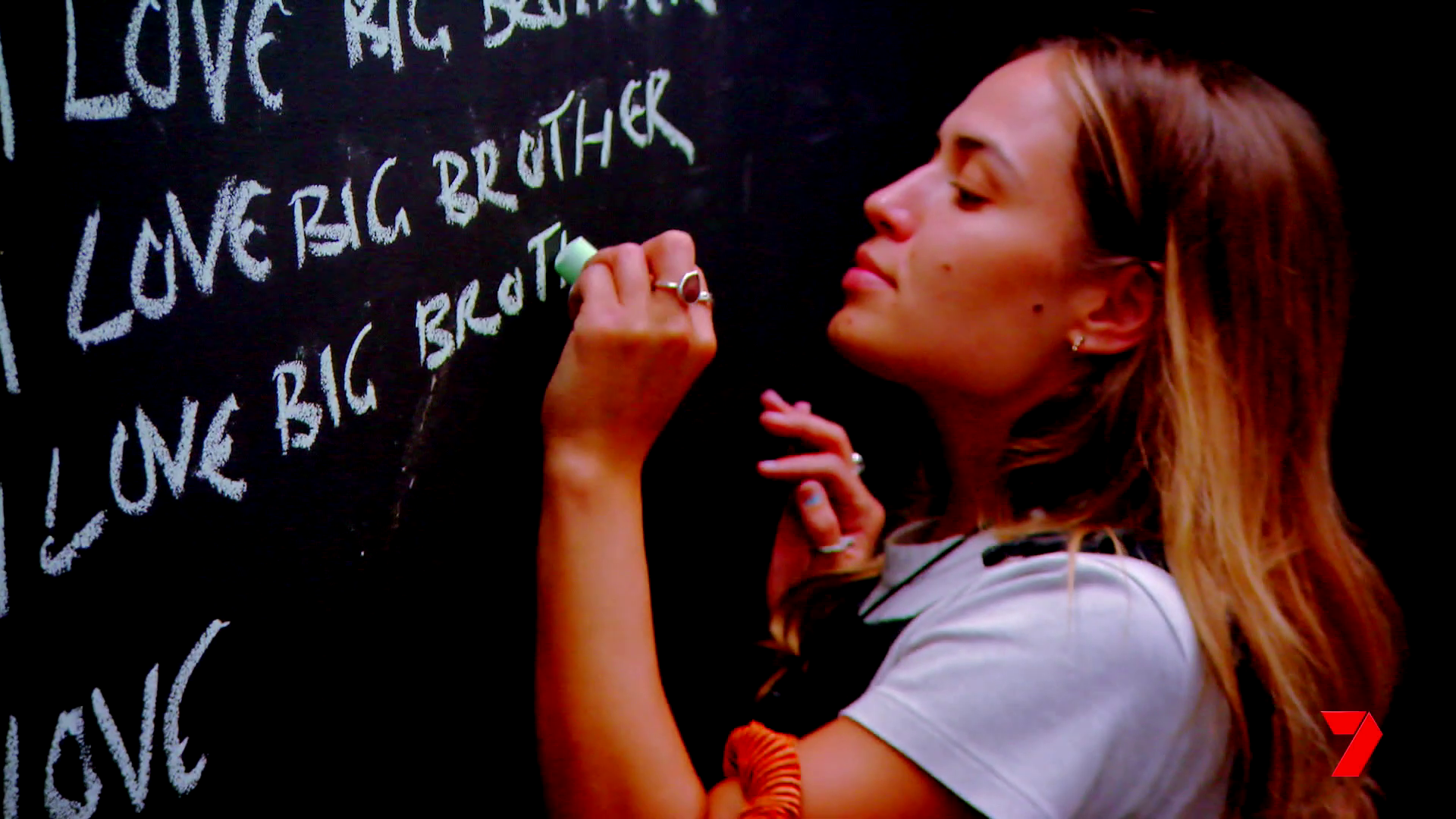 Well, this is the one promo shot that never made it out, unless I'm mistaken.

This could have even been when she threw a tantrum about the penalty for revealing the pedometer task to Chad.

Has any outlet asked her?
C

So apart from the Sophie chalk board scene, any other teasers that never made it to air?

CockroachKieran said:
So apart from the Sophie chalk board scene, any other teasers that never made it to air?
Click to expand...

oh wowwwwwww. Is the style of promo part of the deal? Farrout

You'll have to keep us updated if they use the horrible format as well. I'm guessing from that promo that's a yes?

Awesome site donor
I'm not surprised. Sadly I believe this article was right on the money when they said the new Australian format will set a precedent for all future versions of Big Brother worldwide.

It's just baffling that with the advancement of technology and newly developed access to digital content in 2020, the concept of Big Brother now seems further away than ever before. Unfortunately I'm afraid it's now looking like our cheaper, more cost-effective format will be adopted in other territories.

I recommend checking out the full article - it's a very good read! But here's an excerpt for relevance:

"...and it’s not just fans Down Under that should be worried, as these major changes could soon be adopted the world over.

While the lack of public vote continues to annoy purists, Big Brother USA makes up for it by doubling down on every other aspect of the original concept; it is the only country you can rely on to offer four live feeds every year.

For those that don’t offer feeds – a trend accelerated by Channel 5 ditching them from Big Brother UK in 2011 – there is at least the assurance that the action featured in each fast-turnaround episode was filmed within the previous 24 to 48 hours.

However, Seven’s Australian reboot can’t offer any such assurances. It is the first full ‘civilian’ series in the world to be recorded entirely in advance, airing up to four months after filming took place.

Many Big Brother fans would likely be willing to accept significant gameplay changes, even grudgingly, as long as it otherwise remains true to its principles. Instead, the new BBAU strips back any notion of being live and does away with almost all aspects of public involvement.

When Big Brother loses so much of its DNA, it’s not really Big Brother at all - and it could have ramifications worldwide.

Not all the blame lies with Seven, because it seems Endemol Shine is willing to do anything it takes to keep Big Brother on air. Endemol Shine’s Chief Creative Officer Peter Salmon revealed how the company helps broadcasters cut corners. “We think about the pressures that broadcasters are under in terms of price points and ask how we can help them continue to afford it,” he admitted.

At the time, it appeared he was referring to “lightweight” technical advancements behind-the-scenes, including “AI and biometrics”.

Indeed, there have been multiple breakthroughs in recent years. The iconic remote-controlled hothead cameras are now so advanced that house filming no longer requires manned cameras; Pinoy Big Brother, the Filipino version, took advantage of this by removing camera runs from its house in 2018. In fact, custom-built environments aren’t even necessary anymore. Big Brother adaptations now have the option of putting contestants up in an existing, ready-built house: Poland’s revival was the first to do so, and Portugal has since followed its lead.

Elsewhere, a partnership with Microsoft has seen Endemol implement machine learning and face recognition technologies to aid scene selection during the editing process. “In seconds, we’re able to locate video captured at, say, 1:10 AM that reflects exactly what we want to show on the program, even if no one was watching. That’s a big savings on resources,” explained Lisa Perrin, CEO of Creative Networks at Endemol Shine Group.

However, the new BBAU makes it crystal clear that Endemol is also willing to abandon Big Brother’s core principles to save money.

When TV shows lose sight of what makes them popular, their appeal begins to wane. Who Wants To Be A Millionaire? wouldn’t be as exciting without a seven-figure prize and three lifelines, The X Factor wouldn’t be as dramatic without competing judges, I’m A Celebrity wouldn’t be as intense without fear-inducing challenges. If Big Brother’s top brass will axe live feeds, pre-record months in advance and cut almost all public involvement, where might they go next? Stop filming the housemates 24/7? Give them internet access or let them come and go as they please? These suggestions may seem far-fetched, but so did the changes they have made at one point.

The telly blog ran a story in April claiming: “Endemol Shine were adamant a new Australian version of Big Brother would involve a new format before they would sell it to any local broadcaster. Their plan was to use this market as a test case for the rest of the world in order to evolve the ageing format.”

So it seems now is a good time for Big Brother’s loyal supporters to think about what they want the future to look like."
Click to expand...

The Greece version is a reboot.

Not surprising that Endemol is using the same concept in another State.

Awesome site donor
Even the music!

Exciting times. Time to move forward and not look back at a twice cancelled show.

reepbot said:
Exciting times. Time to move forward and not look back at a twice cancelled show.
Click to expand...

You more than most people know very well that the reason it was “twice cancelled” in Australia lies largely with the networks running the production.

The premise and show itself has never been an issue. The amount of Australians that audition, watch and vote for BBAU - even in 2020 - is enough evidence that Big Brother’s staying power is just as strong as it was at its peak in the 2000s. It’s the mishandling and lack of faith by heads of departments that lets the show down.

Awesome site donor
In saying that, it seems that while the Greek revamp has taken on the same branding and aestetic as Seven's version, it will still be filmed live - and has 24/7 live feeds.