FatPants said:
I officially have no clue on how to tip for tonight. Who knows what the hell is going to actually happen.

Geez I cant wait. Hope the show lives up to the ad.

Yeah, I thought we were done with all the twists.

Oh god no.
It would be just my luck - Luke gets voted out, but is allowed to stay.

If you are #TeamCreepin, you might be interested in Luke's etsy shop where you can buy "Creepin" t-shirts amongt other things.
https://www.etsy.com/au/shop/CreepinCo
@kxk

GoFundMe Campaigns Have Raised Over $100,000 For Luke Toki

After Luke Toki's devastating exit from 'Australian Survivor', Australians have opened up their wallets in support of the Toki family.
While Lukey might have missed out on the $500,000 prize money, fans are hoping to raise the same amount through donations, which have already surpassed a whopping $100,000.

Nicola Britton, GoFundMe's Regional Manager of Australia, told 10 daily that overnight, over 30 campaigns were started in support of Luke.

READ MORE: 'No Words': Australia Is In Mourning After Luke Toki's Exit From 'Survivor'

"The story behind Luke and why he wanted to contend in the first place was to help his family," explained Nicola.

Luke and his wife Mary have two sons with autism and their newborn daughter -- who was just six weeks old when Luke left for 'Survivor' -- was diagnosed with cystic fibrosis.

"We see that ‘medical’ is actually one of the top categories on GoFundMe in Australia. Often it’s the unexpected cost of illness and having children with sicknesses such as travel expenses and relocating to be near hospitals," said Nicola.

How Do We Know Which Funds Are Legitimate?

When dozens of campaigns pop up, it can be hard for fans to know which one they should be donating to, but Nicola told 10 daily that GoFundMe works to ensure all the money raised reaches the Toki family.

"We actually have a trust and safety team working around the clock and they had been keeping on top of them overnight to make sure they were all within our terms of service," Britton explained.

READ MORE: 'I’ve Got This Little Army Wearing Creepin’ Shirts': How You Can Support Luke

She added that, usually, one account will take the lead and some organisers will "notice there's one central fund and divert their donations there".

"They’ll make sure all the money across all 30 campaigns, whether it’s $10 or $100,000 which is about what the main campaign is about to reach," said Nicola.

The crowdfunding website has been in touch with Luke's wife Mary as well as the organisers of the campaigns, who describe themselves as super fans of 'Survivor' and Luke, but Nicola said the outpouring is part of a larger trend of generosity as well.

"I think the support for Luke is part of a broader kind of momentum of these random acts of kindness happening every day that we see on GoFundMe where people are donating to strangers," she said.

The main fund on the website was started by Dave Skow, who has called on fans to "rally behind this Aussie legend". 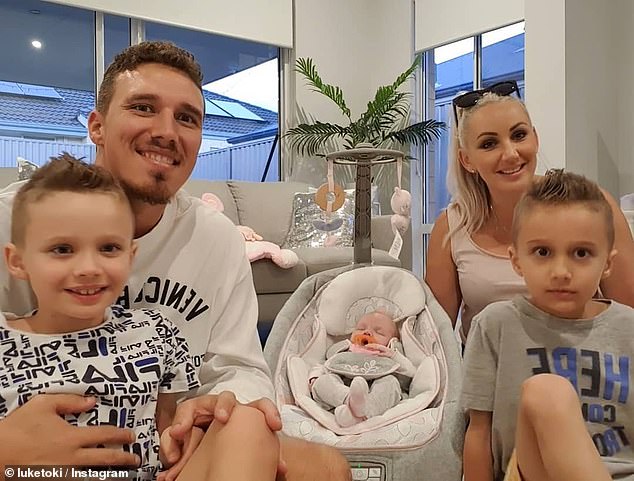 Heartbreaking moment you didn’t see after Luke’s Survivor elimination
Fans were left heartbroken when runaway favourite Luke Toki got booted from the game — but what happened next was even more brutal.

Australian Survivor fans were devastated when season favourite Luke Toki was eliminated from the game in Monday night’s episode — as was Luke himself.

Speaking to news.com.au today, Luke revealed he’d found it difficult even watching back his elimination months after it was filmed.
“Did they have to play that hell-depressing music too? It cuts through you like a knife! They really played it up,” he said with a laugh.
Luke put on a brave face as he was eliminated from the game, hugging the tribemates responsible for booting him out and giving host Jonathan LaPaglia a smile as his torch was snuffed.
But the second he was off-camera, it was a very different story.
“When I got my torch snuffed by Jono, you can see, I’m trying to hold it all together, but then as soon as I walked down that little lane, I was a mess. I was hugging the camera crew, just bawling. Even when I was sat in the chair trying to give that (post-tribal) confessional, it took me about 20 minutes to compose myself.
“I was so close and I’d come so far … I thought I had it, you know?”
The emotions continued in scenes shown in Luke’s Jury Villa package, as he makes a quick call to his family back home as he’s being driven to the Villa.

First he has to break it to partner Mary: “I don’t have the best news … I got voted out. I’ve been crying for the last hour,” he tells her.

“I never would’ve started one myself … there’s still a couple of people left in the game who deserve (the money) just as much as me. But I think my story resonates with a lot of people who have family members with autism or cystic fibrosis. I’m extremely thankful to my core about the donations. I hope the message gets out there that I am thankful, it is going to help my family, and I’ll try to give back as much as possible.”
...................
“I hope everyone backs off her and gives her the recognition she deserves. She played the best game she could from day one. She’s an amazing person and an amazing mum, and she deserves to be there. I hope my fans see that — I love the girl,” he said.

Luke says he’s taking this groundswell of public support one day at a time. He’s already started a podcast called Welcome to the Jungle, “just to get my own thing going”.

or he could be on neighbours.

i mean if tim robards could not only be on neighbours, but be a regular, then someone like luke could do it too.
A

reepbot said:
or he could be on neighbours.

i mean if tim robards could not only be on neighbours, but be a regular, then someone like luke could do it too.
Click to expand...

WTH?!? I'm going to assume you have been smoking too much. Tim is an excellent actor.

Affable said:
WTH?!? I'm going to assume you have been smoking too much. Tim is an excellent actor.
Click to expand...

he's awful at acting
A

worst actor ever. he is truly the foolish creature of acting.
A

reepbot said:
worst actor ever. he is truly the foolish creature of acting.
Click to expand...

Much better than Sonya ever was. Neither deserve the Gold Logie but still.

Affable said:
Much better than Sonya ever was. Neither deserve the Gold Logie but still.
Click to expand...

Eve Morey is a fine actor.
A

And she'd do well on survivor

Even if you are in the minority that didn't take to Luke,,,,,,
this is exceptional news for any fan of Aus Survivor......long may it rule as the best ever RTV show from Australia in my opinion