Executive producer Alex Mavroidakis has hinted at a major change to come in a couple of weeks in response to a question asked by a Behind Big Brother member on Twitter.

@brentalistic – aka Behind BB regular inumeenu – tweeted a question to Alex seeking confirmation that Big Brother Showdown is only due to run for the first four weeks of the series, asking what would happen when it stops airing. 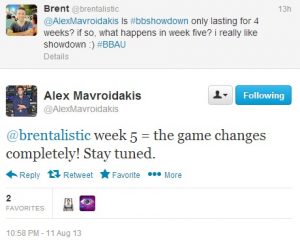 Alex replied stating that the game would change in week 5 – so what change does Big Brother have in store.   The popular theory on the forums is that the divide will be removed and the Halfway House cease to exist – while it is also around about the point that Intruders tend to be introduced into the series.

The other question is how the end of the Showdown broadcast will affect the nominations superpower – and whether the Showdown games in the arena will continue to play a part in the series, but only be shown during the highlights.   If so with three days of highlights to cram into the Monday night eviction shows will the Showdown challenges move from Friday to earlier in the week.

Showdown itself though probably won’t be missed too much by many on the Behind Big Brother forums, with many forumers believing the Saturday time slot would be better utilised for a full highlights programme covering Friday’s events in the house.