delcan said:
people posted the boards for August/Sept and Oct/Nov on Twitter - both had "new aussie franchise" on them for the 7:30-8:30 slot
Click to expand...

delcan said:
people posted the boards for August/Sept and Oct/Nov on Twitter - both had "new aussie franchise" on them for the 7:30-8:30 slot
Click to expand...

That was confirmed to be Survivor.

Awesome site donor
Good to see Now! being added to the line-up, hope they do it well. I've never heard of Heather Maltman though, is she likely to do a good job? Joel hopefully would settle into it and not come across too amateurish.


marquisite said:
hm, so "Now" will be Fallout Zone's replacement, I'm guessing. The question is will it be live footage from the camp and a chance to eavesdrop on the conversations and reactions ... or will it be a 'live' show full of filler and extras from the tenplay website (i.e. little or no live camp footage) .

But if it like FOZ with decent runs of uninterrupted live footage (as much as the classification allows) then yay I guess.
Click to expand...

I didn't watch FOZ so can't compare, but I would assume this would be based on the UK version's side show of the same name. It's a comedic panel type discussion of the events in camp, with a few exclusive clips from camp and behind-the-scenes interviews with the crew on setting up the trials, production etc. It does add something to the show, but thinking of it as a replacement for live feed could make it seem a downgrade I guess.

There are a few episodes on Youtube if you wanted to get a taste for the UK version.

Staff member
Administrator
@pecan Oh ok. It sounds a little better than my preconceived thoughts, if indeed ten stick with how you've described the UK Now format. But you just can't beat live... (actual live, not a live broadcast of taped footage).

Awesome site donor
No, it would be a shame to lose what little live feed there is, I would prefer this as an addition rather than a replacement. And I hope the show is true to the UK version, because their hosts are clearly interested in the show and know what's been going on in camp.

sav0001 said:
That was confirmed to be Survivor.
Click to expand...

Yes. On Channel Ten next year. Most likeky hosted by Rove.

Yep, I posted it on the TV thread , and there is a thread about it

MAUREEN McCormick has been banned from socialising with her I’m a Celebrity... Get Me Out Of Here pals ... and it’s all Joel Creasey’s fault.

Speaking to news.com.au at Network Ten’s 2016 program launch in Sydney last night, the comedian revealed the former Brady Bunch star’s husband has put his foot down after he and McCormick had a messy outing in Los Angeles two months ago.

“I took her out to dinner and she and I consumed several bottles of wine,” said 25-year-old Creasey.

“We played pool all night at a gay bar in Santa Monica called The Roosterfish and I sent her home in such a state that other I’m a Celeb contestants who have tried to hang out with her in LA since haven’t been allowed to because her husband has said no.

“She’s been banned from catching up with us!”

At last night’s event it was announced that Creasey will also be a part of the popular reality TV show next year.

He’ll be heading back to South Africa to host a new program called I’m A Celebrity ... Get Me Out Of Here! Now which will air each night after the main show on ELEVEN.

Creasey will be joined on the show by Heather Maltman from The Bachelor, and Ten said the show will “give viewers behind the scenes action from the jungle, updates about their favourite celebrities and exclusive news and gossip”.
Click to expand...

Bigger stars, mores scares and less chance of getting a meal: Huge changes ahead for new season of I’m a Celebrity ... Get Me Out of Here!
November 26, 2015 4:35pm
Tiffany Dunk
News Corp Australia Network

IF you thought the challenges on the inaugural season of I’m a Celebrity ... Get Me Out of Here looked terrifying, prepare for a whole new level of scare tactics.

“On the English version they’re scared of everything” she said, adding that the Aussie celebs not only wouldn’t bat an eye at a snake slithering through camp, but they breezed through most of the early challenges too easily.

As such, producers plan to up the ante for 2016 by adding more animals, more scares and more ways of not allowing contestants to zone out during particularly scary challenges.

“We’ve got the entire season of challenges already planned out, last year we only had the first two weeks planned” she previewed.

“And we’ve added an element of luck — we don’t want them to win too much.”

In other words, the new celebs better prepare to go hungry more often than not as the challenges decide how many meals they will be awarded each night.

Casting is always crucial for any reality show, and McGarvey said that they have put more pressure on themselves to find big stars for night one but also to make sure that there will be personalities who each bring something different to the table — and create some much needed tension.

“We learnt a lot last year in how to put the group together,” she said.

“We’re being more reflective this year in how we’re putting people together so that personalities aren’t too ‘samey’.”

Another big change for I’m a Celeb fans is the addition of companion series I’m a Celebrity ... Get Me Out of Here Now! Hosted by Joel Creasey and Heather Maltman, it will air on digital channel Eleven after the main show wraps, extending the conversation for super fans.

And McGarvey said that if it’s a success for them, chances are we’ll see a similar spin off show for their other water cooler reality franchises — The Bachelor and The Bachelorette.

“If the Celebrity show performs the way we expect it to on Eleven ... you can expect we will spin-off other shows as a definite,” she said.
Click to expand...

It's good that they're stepping it up a little, so long as they still leave room to move for future series. That was one of the things I thought was good about the first series, that they didn't go overboard with the trials. They did the minimum amount to get the desired reaction from the celebrities and the Australian audience, with a few tougher challenges thrown in for balance, but still leaving room to escalate for future series. Hopefully they'll take the same approach again.
Last edited: Nov 27, 2015

pecan said:
I didn't watch FOZ so can't compare, but I would assume this would be based on the UK version's side show of the same name. It's a comedic panel type discussion of the events in camp, with a few exclusive clips from camp and behind-the-scenes interviews with the crew on setting up the trials, production etc. It does add something to the show, but thinking of it as a replacement for live feed could make it seem a downgrade I guess.
Click to expand...

Yes, it's a spin-off behind the scenes/extra discussion show rather than live streaming. If they've any sense they'll keep the live streaming to air immediately after Now! insterad.

The Aussie networks haven't really used the digital channels for offshoots of the big franchises in the way the UK has - I think you had one season of The Xtra Factor but that's about it. I guess with most of your big franchise airing at 7.30pm the networks don't want to send people off to other channels - including their own - immediately afterwards, plus the fact an hour long show can still be running after an hour and a half makes scheduling across two channels virtually impossible

And they say there's only bad news in the papers these days.

former Big Brother star Skye Wheatley has told Daily Mail Australia she hasn't been contacted to star on the show.
Click to expand... 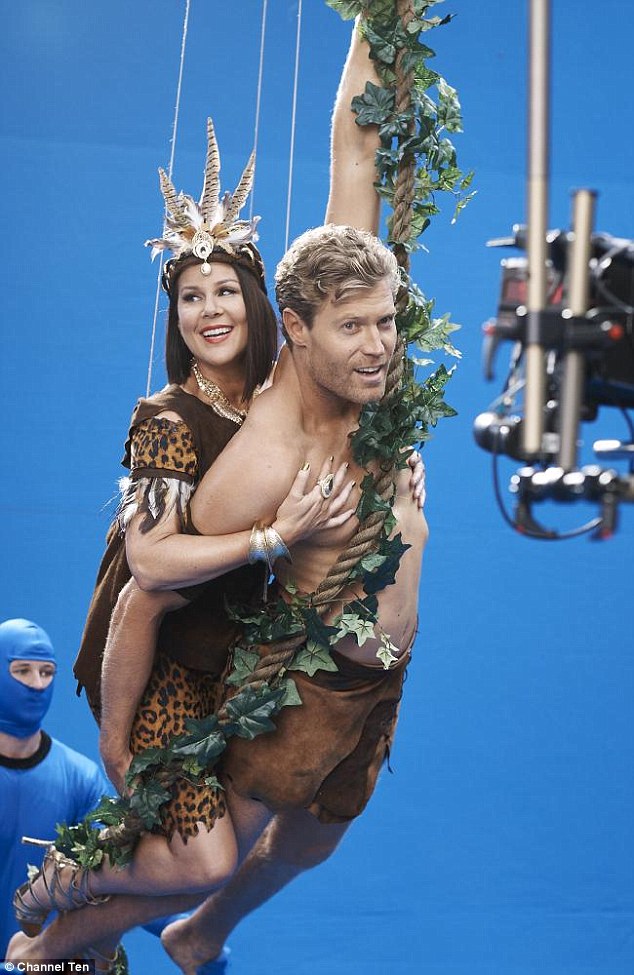 oddjob said:
And they say there's only bad news in the papers these days.

PMSL! I can't even imagine why Skye would be considered.
L 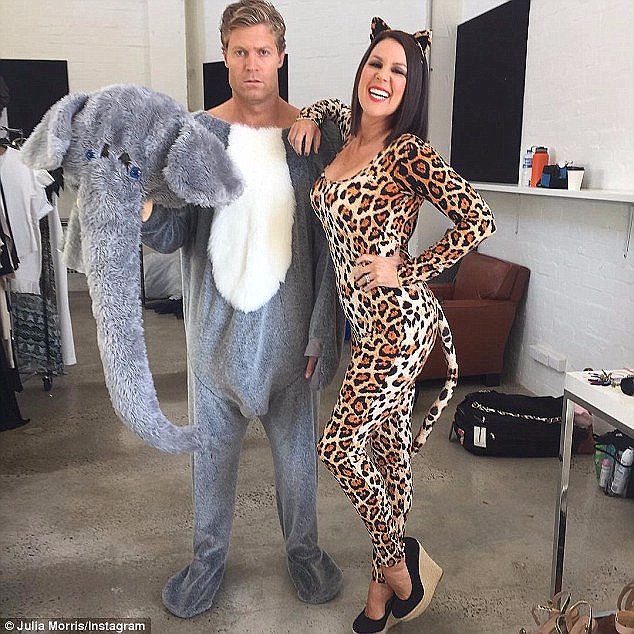 I have to say Julia Morris is the sexy one in that pic. Though Chris is fine even as an elephant!

Here is a link to the new ad for I'm A Celeb:

"Fallen AFL and ex-West Coast Eagle star Ben Cousins is reportedly mulling over an offer of a spot on TV reality show I'm A Celebrity... Get Me Out Of Here."

Meanwhile Ten has confirmed to News Corp that an NRL superstar and theatrical lady will also be amongst those heading to the jungle.

A top contender for the “theatrical lady” slot is Jane Hall. Not only does the actress — who has regularly appeared on stage — fit the bill, but she’d have great insights from her former radio show co-host, and Celeb survivor, Chrissie Swan.

Another doing the rumour rounds is Denise Drysdale.

The former Hey Hey It’s Saturday co-host played coy when asked by News Corp if she was confirmed to head into the jungle. But asked if, hypothetically, she would be up for taking part in the show she said, “Yes I would be.”

Family of slain children ask ‘why?’

Boy not the same after failed backflip

Up for the challenge ... Denise Drysdale says she’d go to the jungle if asked. Picture: Kylie Else
Meanwhile the international DJ slot could be taken out by one of The Stafford Brothers.

Both Chris (who was recently romantically linked to Delta Goodrem) and Matt and are no strangers to reality TV. The pair starred in a self-titled six-part reality show for FOX8 in 2011 which documented the antics of their European tour.

Match fit ... Ian Roberts, pictured here in his NRL hey day, is a rumoured I’m a Celeb contender.
And as for the NRL legend, former State of Origin player and Australian representative Ian Roberts’ name has been thrown into the ring. Roberts also dabbled in acting before returning to work as an electrician in recent years.

Former Australia’s Next Top Model mentor Didier Cohen is also being whispered about by industry insiders, and could fit the supermodel bill.