Awesome site donor
…hahahaha!… I can’t believe that she said the movie ‘Goonies’!… lol!… I just love her for that lol!… cheers.

Mr Stickyfingers said:
…hahahaha!… I can’t believe that she said the movie ‘Goonies’!… lol!… I just love her for that lol!… cheers.

Good taste in movies. Terrible taste in food and music!

Singing In The Rain still cracks me up. 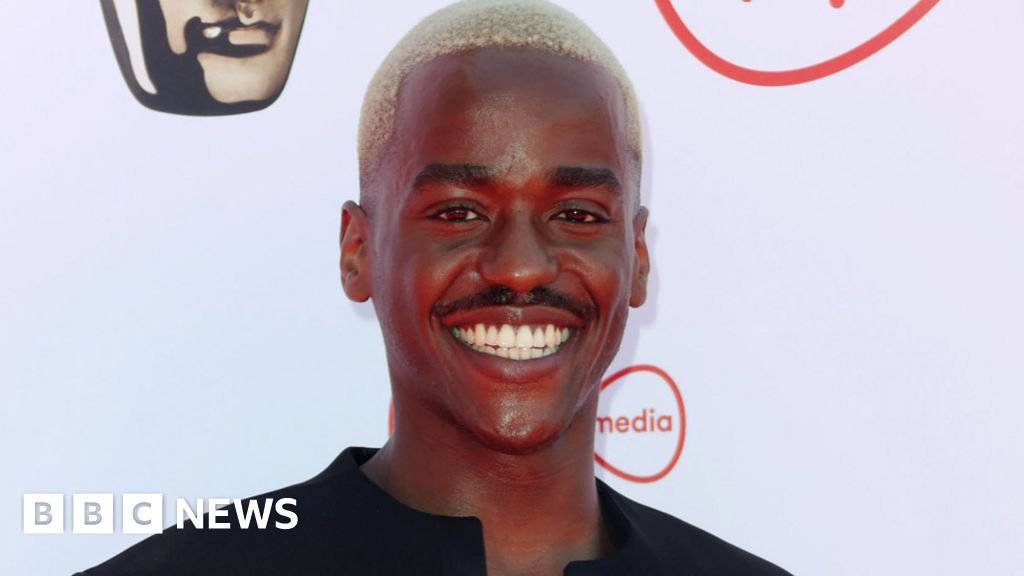 Ncuti Gatwa: BBC names actor as next Doctor Who star

I've never heard of him and I'm not sure about the choice, but we shall see.
I had the same reaction when I heard about Matt Smith, and he turned out to be very Doctorish.
He seems nice and is very handsome.
I can't yet see what RTD sees in this guy that screams The Doctor, but hopefully there will be some kind of eccentricity and he'll win me over.

Staff member
He is brilliant in Sex Education - does both drama and comedy very well.

I hope we see him with Ruth Doctor too!

Awesome site donor
…a black Doctor?… I suppose that the next one will be a Chinese one?… I’ll wait until I see him in the role of The Doctor until I start making comments on the decision… he may just pull it off as The Doctor… who knows?… I kicked up a stink way back then about The Doctor becoming a woman before and Jodie filled the role quite well to a certain extent… so maybe he will do quite well too?… if the role was going to a black man to keep up todays trend of ‘keeping up with the times’ I would have liked to have had Richard Ayoade do his take on the role… but as Brekkie said…


Brekkie said:
He is brilliant in Sex Education - does both drama and comedy very well.
Click to expand...

…I’m willing to go with today’s modern William Shakespeare of writing (Russell T Davis) decision to put him in this role and see if he does well or not?… still… I wonder what William Hartnell would have thought of the decision if he would have still been alive?… “hmmmm!… yes!… quite… strange indeed!”… to see The Doctor come from being the original male grandfatherly figure to a modern vibrant female figure and now perhaps a future young black adventurous Doctor is quite a ride!… I accept now the need for change to keep the franchise modern and alive so I will give this latest incarnation of The Doctor a go… let’s hope he does well… cheers.

Awesome site donor
…I just thought of something… Yaz has had a simmering underlying love for Jodie’s Doctor for quite a while now…she’s been really attracted to her in a sexual way… how will her character accept suddenly losing that with her regeneration into a young black man?… it’ll be like losing a true love to her… her reaction to that and how she copes with it will be worth seeing it in itself… I’ve never really liked Yaz’s character before now so maybe that will make Yaz more interesting to me in the future?… lets wait and see I guess… cheers.

Hopefully Yaz will leave when Jodie does, and we can start afresh with new companions.

Staff member
Yes - it's usually a clean slate isn't it, especially when the showrunner changes as well.

RTD is bringing back David Tennant and Donna!

Meglos said:
RTD is bringing back David Tennant and Donna!

Yep! The rumours were true! Maybe just for one episode only?

Donna is the best!

inumeenu said:
Yep! The rumours were true! Maybe just for one episode only?

Maybe.
When I saw the news I thought it was probably just in the audios, but it's the real tv series.

Awesome site donor
They're back! David Tennant and Catherine Tate return to Doctor Who

One of the most loved pairings in Doctor Who’s history have reunited and are filming scenes that are due to air in 2023 to coincide with the show’s 60th anniversary celebrations. 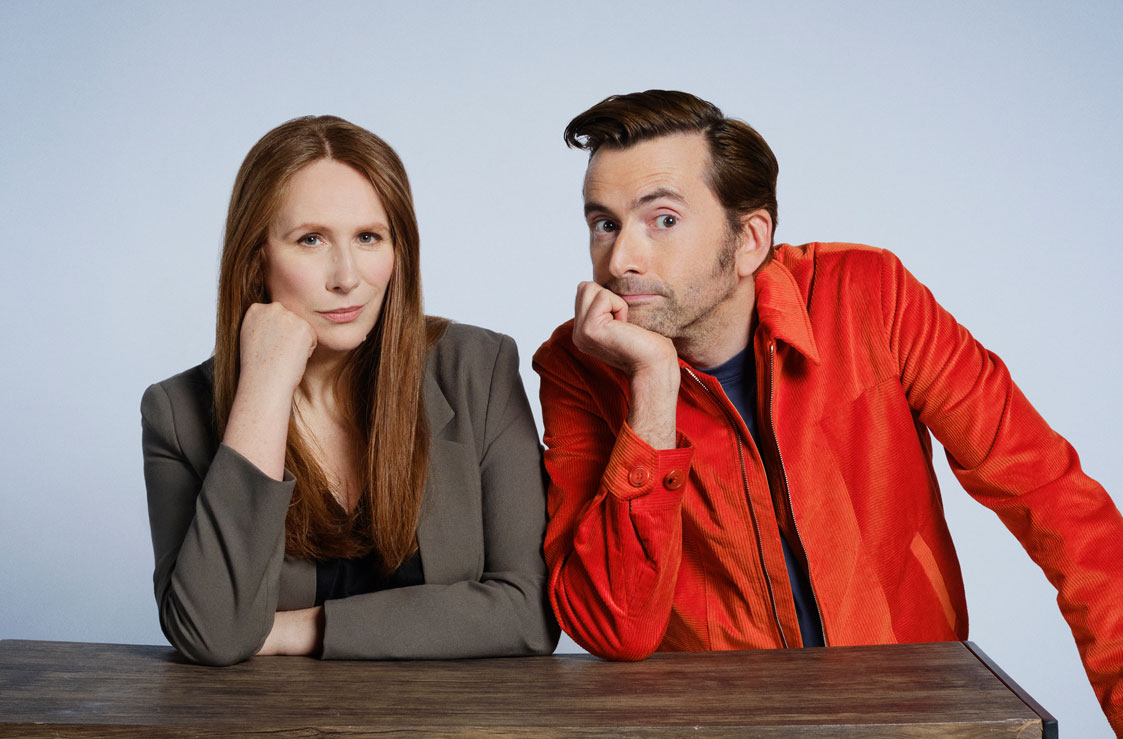 The Doctor and Donna parted ways when the Doctor had to wipe Donna's memory, making her forget him, in order to save her life. He left her family with a warning: if ever she remembers, she will die. But with the two coming face to face once more, the big question is, just what brings the Doctor and Donna back together?

Russell T Davies, Showrunner says: “They're back! And it looks impossible - first, we announce a new Doctor, and then an old Doctor, along with the wonderful Donna, what on earth is happening? Maybe this is a missing story. Or a parallel world. Or a dream, or a trick, or a flashback. The only thing I can confirm is that it’s going to be spectacular, as two of our greatest stars reunite for the battle of a lifetime.” 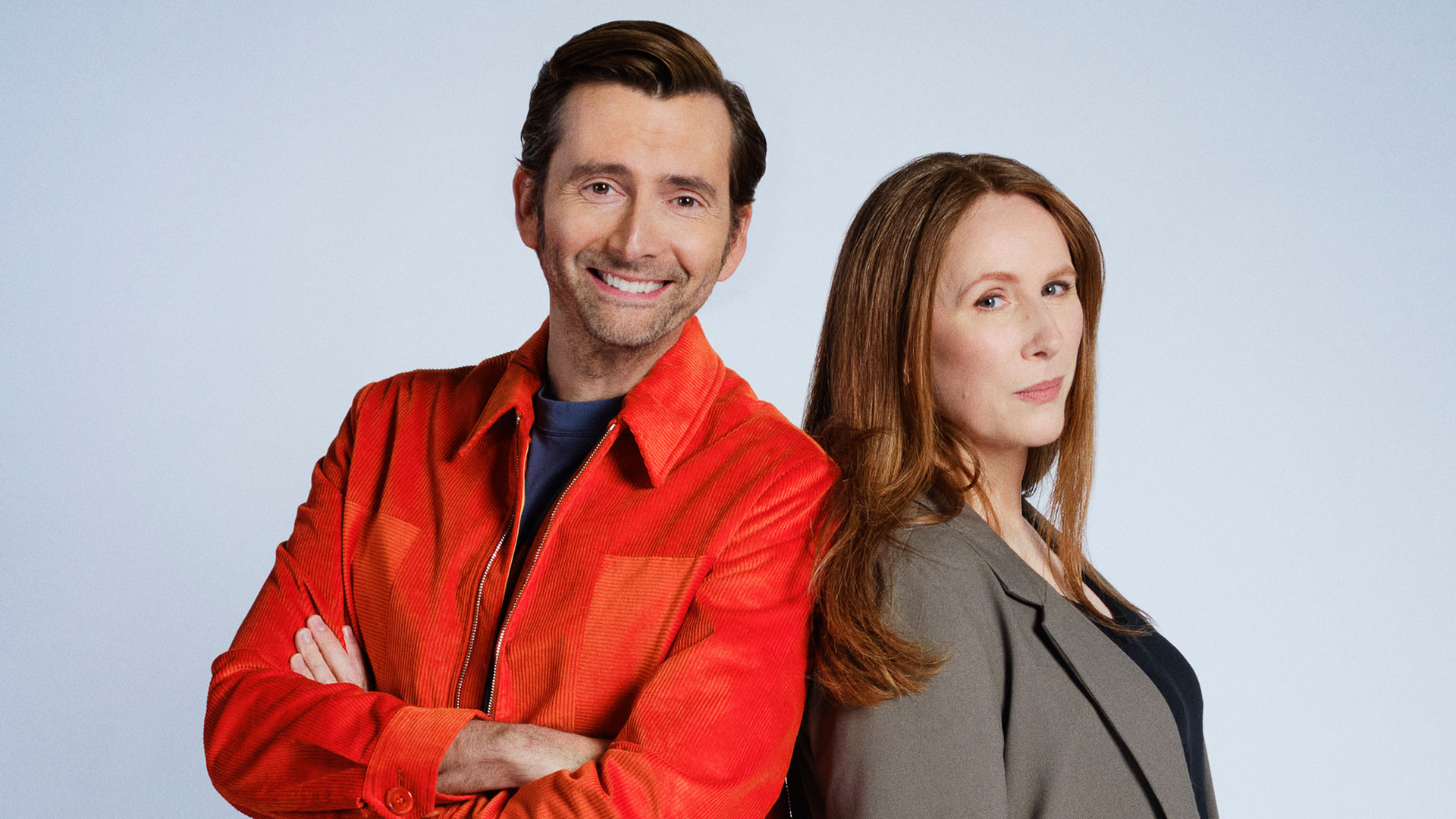 In his last ever episode, David’s critically acclaimed portrayal of the Doctor famously said “I don’t want to go…” Well it seems he - and fans across the globe - have got what they wanted as the iconic duo are on their way back…

…this was sent to me via email from the BBC Doctor Who website that I subscribe to… cheers.

Yasmin Finney has joined the cast of Doctor Who playing the character of Rose and is filming scenes that are due to air in 2023 to coincide with the show’s 60th anniversary. Currently captivating audiences with her performance as Elle Argent in Heartstoppers, Yasmin is receiving rave reviews across the globe. 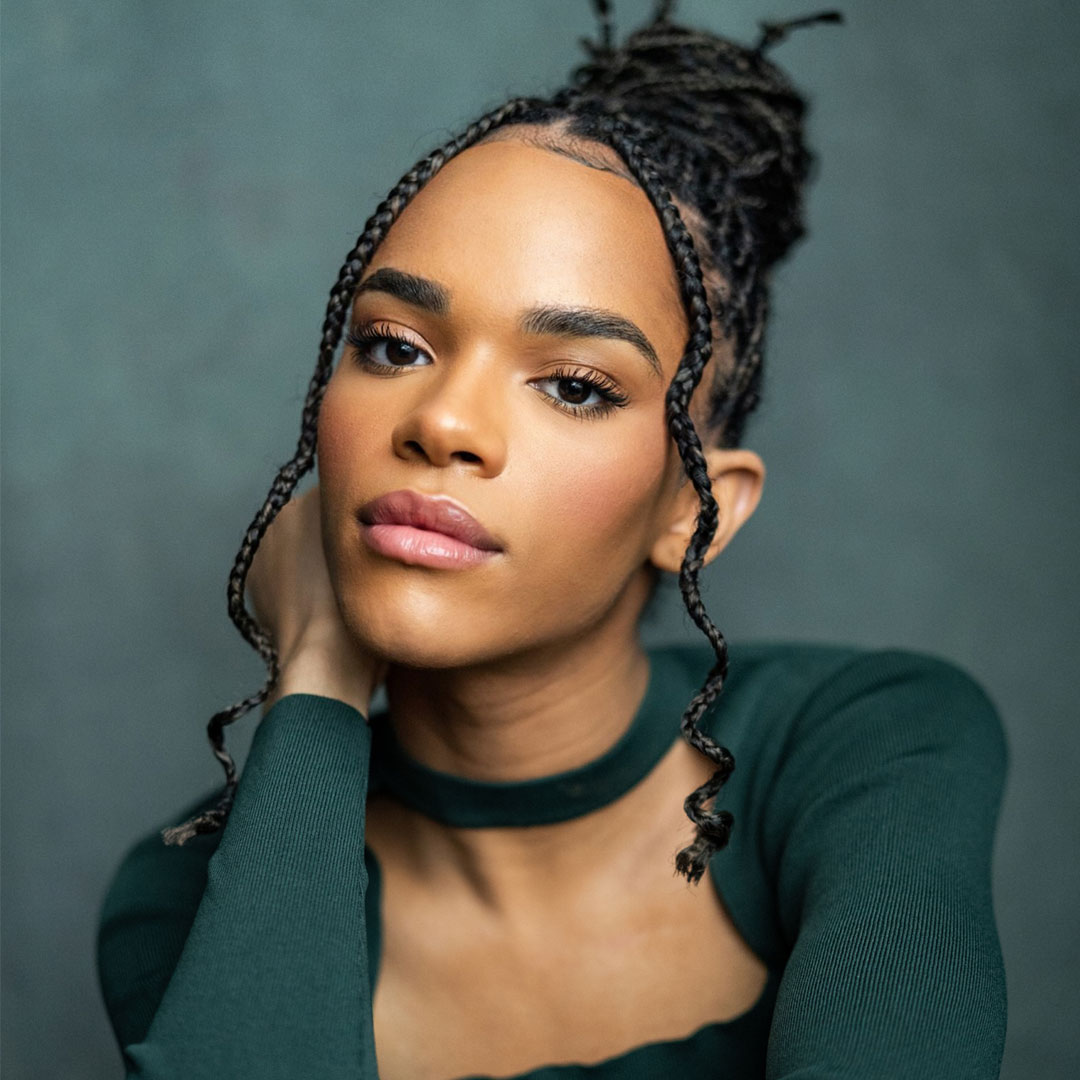 Speaking of joining Doctor Who Yasmin says: "If anyone would have told 8 year old Yasmin that one day she’d be part of this iconic show, I would have never in a million years believed them.

This show has a place in so many people’s hearts, so to be seen as a trans actress by the legend himself Russell, has not only made my year, it’s made my life. I cannot wait to begin this journey and for you all to see how Rose blossoms. Get Ready.”

Russell T Davies, Showrunner adds: “Life on Doctor Who gets brighter and wilder, how can there be another Rose? You’ll find out in 2023, but it’s an absolute joy to welcome Yasmin to the Doctor Who set. We all fell in love with her in Heartstopper, one of those shows which changes the world - and now Yasmin can change the Whoniverse!”

this was in the same email… cheers.

…on this website below… it’ll be great if it’s true… cheers.​

A new behind-the-scenes Doctor Who spin-off show will accompany the sci-fi series from 2023.

Returning showrunner Russell T. Davies has commissioned the series believed to be called Doctor Who: Unleashed which will begin in 2023 in conjunction with the 60th anniversary special which sees David Tennant reprise his role as the Tenth Doctor alongside Catherine Tate as his companion Donna Noble.

The programme will be fronted by BBC radio presenter and gaming reporter Steffan Powell.

The show will be in a similar format to Doctor Who Confidential - which launched in conjunction with the series when it was brought back in 2005 by Russell and which ran until 2012 – giving fans interviews with the cast and writer, as well as sneak peaks of filming and special effects wizardry.

The sister show is part of Russell’s grand plan to boost Doctor Who’s flagging ratings and get fans back on side following the disappointment of departing showrunner Chris Chibnall’s time in charge and a lukewarm response to Thirteenth Doctor Jodie Whittaker, the first woman to ever play the Time Lord.

A source said: “Doctor Who Confidential was hugely popular amongst fans when Christopher Eccleston brought the show back as the Ninth Doctor and that continued during David’s tenure in the TARDIS as the Tenth Doctor.

“Russell is aware that Doctor Who fans can never get enough content when it comes to the show and how it is made, with David and Catherine making a sensational return to the show, he thought the time was right to bring back a behind-the-scenes show which will document their comebacks and show how the special was made.”

The plan is for Doctor Who Confidential to continue to run in conjunction with the series when Russell’s first full season airs with Ncuti Gatwa joining as the Fourteenth Doctor.

Russell helped revive Doctor Who in 2005 and was the showrunner until 2009. Episodes under his tenure featured Christopher Eccleston and David Tennant as the Doctor with ratings of over ten million.

Recent episodes under showrunner Chibnall has struggled and the New Year’s Day special this year attracted 3.4million in the overnight figures, although more people have since watched on BBC iPlayer.

At the peak of its powers, spin-off show Doctor Who Confidential announced in a BBC1 special that Matt Smith as the new Doctor in January 2009 and then screened the first in-depth interview with him in the role.

Awesome site donor
…if this is the next Doctor…


…then I have just had an official mental orgasmic mind fuck!… I just hope that it’s true… can I be that lucky?… cheers.

Mr Stickyfingers said:
…if this is the next Doctor…


…then I have just had an official mental orgasmic mind fuck!… I just hope that it’s true… can I be that lucky?… cheers.
Click to expand...

Awesome site donor
I haven’t watched the Flux series so I need to catch up. But I assume DT will only be very temporary.
Ncuti Gatwa has already been announced as 14, and he was in the promo for the next season.

bleachy_dude said:
I haven’t watched the Flux series so I need to catch up. But I assume DT will only be very temporary.
Ncuti Gatwa has already been announced as 14, and he was in the promo for the next season.
Click to expand...

…yes I know that Ncuti was but I’m hoping in a way that it was misdirection by Russel T Davis to put everyone off the scent of David returning as the next Doctor… but sadly I think that you are right bleachy… it may be only temporary… so I’ll have to savour every moment while I can that David is The Doctor I guess?… cheers.
You must log in or register to reply here.
Share:
Facebook Twitter Reddit Pinterest Tumblr WhatsApp Email Share Link
Top