I think David is a sweetie.

Beards are "in" this year. Looks like he will last a few weeks at least.

He's gonna be this year's Xavier. I don't think he'll make it far.

I hope he does though. Seems likable.
S

I can see him being a bit of a tag along like Xavier.

Vomit at all the "Go the Beard" posters that will be held during the live audience shows, they're definitely trendy....

My official sweepstake hm! And he's kind of adorable! Win!

That shirt is just awful. 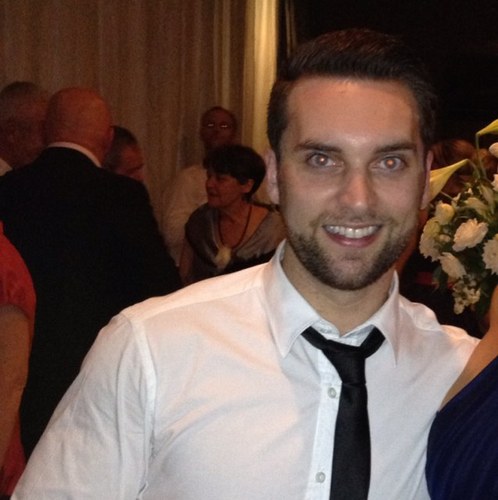 My sweepa hm needs more attention. Partnered up with Sandra, I feel these two naturally get along

I wasn't sure before but yes, I like him too.

I wonder if BB will have a challenge which requires David the choice to shave off his beard? how long would his beard take to grow back?
I'm not a fan of the beard but he seems a nice enough guy from what we've seen so far

Beard-proud radiographer David, 31, describes himself as a normal Aussie guy looking for his next adventure.

He likens relationships to wild flowers, believing that ‘if it’s not all roses by three months, you’ve gotta cut ‘em!’ Suffice to say, he doesn’t dish out the ‘L-word’ too flippantly, and has never had a long-term relationship, but thinks he’s destined to find love in the Big Brother House!

Sports-mad and fiercely competitive, David is guaranteed to be one of this year’s biggest game players. But he’s a self-confessed people-pleaser too, and will happily make himself the butt of a joke for the amusement of the masses!

On working as a radiographer:
I believe I'm a good person for healthcare because I'm always looking for the light side of things, and we deal with a lot of people facing their darkest days … If you can put a smile on someone's face when they're in some of their darkest periods, then it really can go a long way.

On his greatest love:
My biggest love in life is the English Premier League! I love my football; I can't live without it and I don't know how I ever will live without it while I'm in the House … If my team lose, it's game over and I'm cranky for the day.


On his celebrity doppelgänger:
I have often been stopped and asked if I was Toby Maguire, especially during the filming of The Great Gatsby – that was my peak period. It was a long time before the beard, but they still say they can see it from the eyes up. It's not uncommon for me to be stopped and asked if I'm Spidey.

On his pet hates:
Princesses; people who idolise people like Kim Kardashian - they're not people we should be idolising; people who dribble on the toilet seat and don't wipe it up – that's not for me to wipe up, people; crazy drivers – people who don't follow road rules do my head in; people who don't appreciate the work that healthcare workers do for them …

On his best physical trait:
My best trait would be my eyelashes; I have a lot of envious female friends.

On finding love in the Big Brother House:
I'm not going in looking for love, but if love finds me, hey maybe it's the right time … I look at my parents, who are still together, and they absolutely adore each other, so that's what I aim for. If I can get into something like that then there's absolutely no reason I wouldn't be in a relationship.

On having the smarts:
I would say I am street-wise, maybe not book-smart. I have to work for my book-smarts … But for me, I can get by in everyday life because I'm switched on and cluey in the important aspects of life.

On his ‘luscious’beard:
My beard is there for a reason: it hides what my father gave me, and that is my double chin … I'm not gonna get rid of it because my mum wants it gone!

On playing the prankster:
I love a prank, and there could be plenty of that given the opportunity in the House. I love to sneak up on people; I love to give them a good old scare ... They don't have to be elaborate, they've just gotta be effective.

On drive and ambition:
I have worked hard to get to where I am, so everything that is mine I do appreciate because it's on the back of hard work to get there.

He’s football mad and occasionally a Tobey Maguire doppelganger, but this radiographer had better not be too transparent to play the game.

David describes himself as an “average guy”, and expects his everyman sensibility to get him through the weeks in the House.

The Housemates had better watch out for his prankster ways and his forthright opinions, but he expects it will be his sense of humour that serves as both his strongest and weakest point.

“Something I do to try and impress people is make them laugh at my jokes,” David says, but adds, “None of my jokes will be politically correct.”

Will David’s ‘dad jokes’ be enough to keep his Housemates entertained? Make sure you watch Big Brother to find out!

Remember someone recently posted here who auditioned for BB, said they met a guy who was radiographer and Tobey Maguire lookalike

BAM! There it is. Toby Maguire.

Sweetgeek said:
My sweepa hm needs more attention. Partnered up with Sandra, I feel these two naturally get along
Click to expand...

Haha I feel sorry for you!