News - we do not have our contestant announced yet.
Denmark has selected their's...........ta da, an Aussie, weird

Eurovision 2017: Aussie to sing for Denmark
Beautiful, young and talented: The Australian singing for Denmark at this year's Eurovision.
Anja Nissen, shrieky winner of one of our Voice comps, pushed by Wil.I.Am.

So I guess that is where she has been hiding.
Good luck, i thought she was awful.

When I first saw this I thought oh no if she was singing for us - phew, thanks Denmark

Eurovision is in Ukraine this year I think.

Today the European Broadcasting Union launched the inaugural Eurovision Choir of the Year, to be hosted in the Latvian capital Riga on 22 July. Before you get excited enough to look up Latvia on a map, the UK aren’t taking part, even though we’d definitely win. But before we tackle Britain’s unsurpassed choral supremacy, what can we expect from the very first Eurovision Choir of the Year? The official blurb tells me that only seven EBU member countries are currently confirmed (Austria, Belgium, Denmark, Estonia, Latvia, Germany and Slovenia), with each nation performing a six-minute unaccompanied set, in any genre, with no limits on the number of singers.

So we’re talking an unlimited number of people, singing whatever they like, for six minutes. It could be 12 Estonian pensioners singing folk songs, or 85 Austrian children yodelling Toto’s Africa – the possibilities are infinite. I once witnessed a Spanish choir singing a McFly medley, so who knows what musical delights are in store. 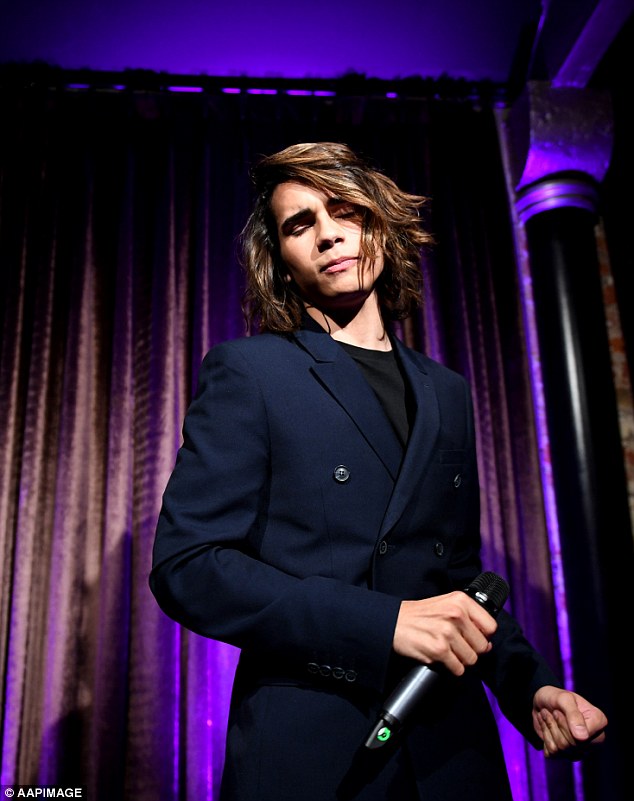 What the who now?

And Julia and Sam aren't hosting any more either.

And here is the crap we are sending, we will not make finals this time.
OK I think we needed to step back a little so we don't piss em off...but this stinks

Apparentley they got a few knock backs, not wanting to follow how amazing Dami was

oddjob said:
And Julia and Sam aren't hosting any more either.
Click to expand...

And here is the crap we are sending, we will not make finals this time.
OK I think we needed to step back a little so we don't piss em off...but this stinks

Apparentley they got a few knock backs, not wanting to follow how amazing Dami was
Click to expand...

We will make it to the finals just because it is Australia. But we won't even make the top 10 this year in the final.

Vote early and often in The Eurovision Top 40 Song countdown Do you have a strong opinion on what the greatest Eurovision song of all time is? We're airing a Top 40 Eurovision song special on 10 May. Here's your chance to have your say on which songs are the BEST. Vote now!

Still no new hosts announced - Julia clearly has stuff to do, she is doing the Stargazing thing with Cox in April

*Can't for the life of me understand why Julia might ditch Eurovision for PopStargazing at Brian Cox*.

Good onya Ukes, they have banned the Russian choice of singer, tee hee

We have to respect the local laws of the host country, however we are deeply disappointed in this decision as we feel it goes against both the spirit of the Contest, and the notion of inclusivity that lies at the heart of its values.

We will continue a dialogue with the Ukrainian authorities with the aim of ensuring that all artists can perform at the 62nd Eurovision Song Contest in Kyiv in May.

And on Friday, radio host Myf Warhurst, 43, announced via Instagram that she and comedian Joel Creasey, 26, are taking on the honour: 'Dream gig alert'.

Myf yes, him hmm....do not keep doing this mouth thing 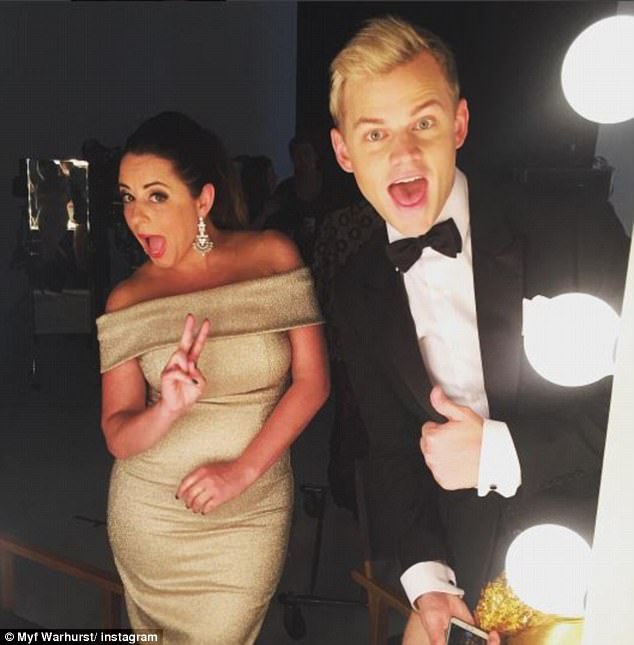 Comedian & Joel Creasey shouldn't be in the same sentence.

The Eurovision Song Contest voting procedure is legendary, with the results coming from a mix of viewer votes and votes from a jury of industry professionals.

Half of the vote is decided by the national jury in each participating country. Each jury comprises of a team of respected local music/entertainment figures with extensive experience in the industry and, of course, a passion for the world’s biggest song contest. The jury is selected by SBS, based on criteria set out by the European broadcasting Union.

So without further ado, it’s time to meet Australia’s 2017 Eurovision Jury, charged with finding the performers guilty of pop perfection:

Lucy Durack
Lucy is one of Australia's leading ladies of the stage, with a list of major roles to her credit. She has won awards for her roles of Glinda in Wicked and Elle Woods in Legally Blonde the Musical. She performs regularly in concert and has a popular radio show ‘My Soundtrack’ on the ABC.

Jordan Raskopoulos
Jordan is a comedian, musician and digital content creator. She is best known as the lead singer of The Axis of Awesome, a world-renowned musical comedy group and YouTube Juggernaut. Jordan also hosts ‘This is About’, a narrative non-fiction podcast on ABC.

Stephen Capaldo
Steven is a conductor and music educator working with symphony orchestras, wind orchestras, chamber ensembles and in community music and education. He is an active composer and arranger. His works have been performed and recorded in Australia, Canada and the U.S.A.

Jackie Loeb
Jackie maintains her reputation as a stand-up comedian, while distinguishing herself as an actor, musician and writer. She has performed cabaret shows at New York City’s ‘Don’t Tell Mama’ and had a sell-out season at the Adelaide Cabaret Festival. She has released two albums, and brings her latest stand-up show Forty-five to the Sydney Comedy Festival this week.

Peter Hayward
Peter has been working professionally in the entertainment industry for over 15 years. He has performed as a Music Director across Sydney and as a backing vocalist and percussionist for numerous live events. Peter is Creative Director of Southern Stars - The Arena Spectacular and Associate Director of the Schools Spectacular.

PUBLIC VOTING
In each Semi-Final, 10 contestants are chosen to qualify for the Grand Final. As per the official Eurovision rules, viewers in all countries taking part in a particular Semi-Final are invited to vote via the official app, telephone and/or SMS.

Australian viewers are eligible to vote in Semi Final 1 (in which Australia’s Isaiah will perform) as well as The Grand Final. The voting window for Semi Final 1 and the Grand Final opens after the last song has been performed, and ends 15 minutes later.

For Australian viewers, this means they will need to tune into the LIVE broadcasts of Semi Final 1 Wednesday 10 May, 5am (AEST) and the Grand Final Sunday 14 May, 5am (AEST) and text or call the numbers that appear on screen during these live broadcasts. Jury members and public voters can’t vote for their own country, but there are plenty of other outstanding acts alongside our Australian hopeful Isaiah.

Will voters embrace Italy and their dancing gorilla, or will they be wooed by Romania’s yodelling? Will the Swede’s slick choreography win them over, or will the Aussie performing for Denmark, Anja Nissen, take the prize?

AUSTRALIA’S EUROVISION SPOKESPERSON
SBS World News presenter and TV icon Lee Lin Chin will once again resume her essential role as Australia’s Eurovision Spokesperson. The inimitable newsreader will once again present Australia’s allocation of points with her spot on pronunciation and one off legendary fab outfits.

The Eurovision Song Contest is May 12 - 14, 7.30pm on SBS, with live early morning broadcasts from May 10, 5am. For those that can’t get enough Eurovision, Myf Warhurst and Joel Creasey will present the Top 40 songs from Eurovision’s 60 year history as voted by Australian fans in the Eurovision Top 40 Songs special at 8.30pm, Wednesday 10 May on SBS.

Preview of how bad the bargain basement budget new hosts can be I guess. I would really rather take the commentary from UK Graham Norton.
Surely the other 2 left and these are the dregs they had to mash together.

It's the world's ultimate, crazy song competition and Australia has been watching for over 30 years. There are so many highlights in the contest's history, now it's time to decide the top 40 favourite songs. SBS Eurovision hosts Myf Warhurst and Joel Creasey present the Top 40 songs from Eurovision's 60-year history with the countdown entirely voted by those who know best, Australia's Eurovision fans. A host of Australian musicians, comedians, celebrities and Eurovision fanatics discuss some of their hilarious insights about featured moments, including Richard Wilkins, Adam Liaw, Lucy Durack, Johnny Ruffo, Casey Bennetto, Michalas Banas, and featuring special instudio performances by Dami Im, Paul Capsis and Bjorn Again.

Oh and our boy has performed and....


He got through to the next bit, he is into finals????, He may have hit one bad note I have been told, he should make a few fans he is very prettyJust saw SBS, yep bum note, but got thru

WOW. did not know Jonny Logan the Irish winner x 3 times - is from....FRANKSTON

Aussies are all over this thing, of course they had to let us in officially we have been in there performing - for other countries, writing songs, and stuff....