Here we are at the nostalgic end of another season, and Behind Big Brother wouldn’t be the perpetual critics we are without sharing our highs and lows of BB 2012… 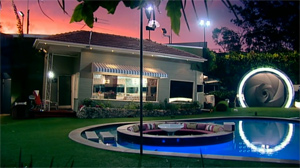 The house – easily one of the best designed houses in Big Brother history, it was built around a great concept – “eras in time” (although the concept for some reason was quickly forgotten). A new outdoor area meant it was cosier and more claustrophobic. The versatile utility room (which became the parlour, man cave, and so on) helped the scenery stay fresh throughout the season.

Secrets… the second time they did it – it seems the producers got a little more comfortable experimenting with the show in the final weeks, and a great result was the “last supper” secrets episode giving the housemates a glimpse of the backstabbing as the audience sees it. This was an emotional journey and a great stunt to ensure ratings were propped up towards the end.

Big Brother’s sassy attitude – owing in part to primary BB voice Leon Murray ad-libbing his lines, Big Bro was far more witty this year. We half expected him to start clicking his fingers and pursing his lips at the housemates. Compared to the dull, almost wooden Big Bro from 2004-2008 this was a welcome change.

The tasks department tried this year – although many tasks were rehashed versions of the “wait around for something to happen” format, overall much more effort (and budget) was placed into running weekly tasks. The second house twist was a fresh idea (although unfortunately executed terribly) and other standout tasks were “just say no”, “spend Big Brother’s cash” and “Big Baby”.

Surly the fish… an idea yanked from Big Brother UK and given an amphibian makeover. Surly was initially a welcome addition to the house a bit of surreal escapism in an otherwise stark reality TV house.

…until Surly kept dying – this one’s a no-brainer. After Surly had been wheeled out for the 104th time and we all realised this fish really is being replaced every week it wasn’t a fun gag anymore. And we started breathing a sigh of annoyance.

The sound proof nominations chamber… that wasn’t actually soundproof. A bit of a “sell the show” ruse in earlier weeks but two months on it ended up being very unnecessary. Just have nominations in the diary room!

Confidential – like a bad recurring nightmare this show kept scarring us week after week. It flopped around between channels and time slots in early weeks but never quite found its feet. In the end it felt like Mike Goldman’s voice acting side project, except no one was watching.

Family friendly format – we’re not sure if this was specifically something Channel Nine demanded, or it’s how Southern Star Entertainment managed to sell the show again, but family friendly stinks. This restriction affected every aspect of the season. Daily shows became sanitised and occasionally difficult to follow due to over-editing. With sex and “mature themes” off-limits conversations between housemates frequently defaulted to high school gossiping about “who will hook up with who”. And the most disastrous effect of family friendly was of course…

No live internet feeds – seriously, what were they thinking?

What are your highs and lows of the season? Leave us a comment below or join us in our unofficial discussion forums.